Welcome to the HEATED Lab! We study heat and electron transport in nanoscale devices, interfaces, materials and composites, with the aim of improving the energy efficiency of electronic devices. We are also interested in spectroscopy and optical pump-probe techniques for the characterization of materials and magnetization dynamics near phase transitions.

We are associated with the Nanotechnology and Biotechnology Research Group at York University.

Our lab is home to LUTher (Laboratory for Ultrafast Thermo-magnetics), a CFI-funded infrastructure for the study of ultrafast phenomena taking place in magnetic materials at high-temperatures, particularly near the Curie point. 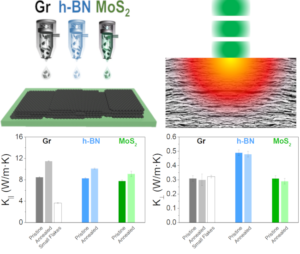 Strange things happen at the nanoscale! The thermal conductivity of thin films of inkjet-printed graphene, h-BN and MoS2 nanoscale crystals yielded surprising results. Along the plane of the film, the crystals were surprisingly similar - an unexpected result, since the intrinsic conductivities of these films differs by about 50X. The conductivity happens to be limited by how well the phonons couple among adjacent flakes. For transport across the plane, we found ultra-low thermal conductivity - lower than glass. Even though the conductivity is so low, it is associated with nearly perfect transport across overlapping flaked, and it is mostly limited by how thin the flakes are. This type of transport is not common, not only because the conductivity is so low, but also because usually lowering the conductivity to this level needs to be done by making alternating layers of materials with large mass difference, while here this happens for layers of the same crystals. Read more in the full paper. 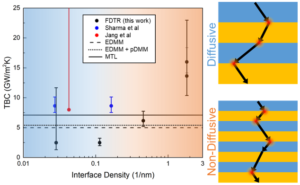 We have studied how the apparent thermal boundary conductance at the interface of metallic multilayers behaves in the high interface density regime just above 1/nm. We have found first evidence that electron transport at these interfaces deviates from the diffusive limit. 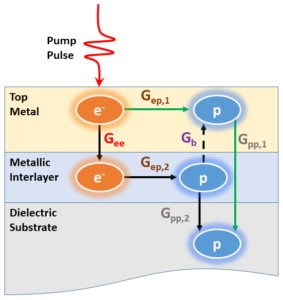 Through time-domain thermoreflectance (TDTR), we have studied the different heat transfer pathways at metal-dielectric interfaces with the presence of an ultra-thin metallic interlayer. We have seen how the thickness of the metal interlayer can be as little as 2 nm to have substantial impact on how energy is transferred. We have found that besides the phonon properties in each material, the electron-phonon coupling constant also plays a major role in transport.

We have applied frequency-domain thermoreflectance (FDTR), an optical pump-probe technique, to the study of heat transport in nanostructures. To enable sufficient sensitivity over such small length scales, we have developed means to extend the modulation frequency of FDTR to ~200 MHz. For the study of heat transport in anisotropic materials, beam-offset FDTR or FD-MOKE enhance our ability to detect in-plane heat transport such as in the case of one-atom thick graphene layers. We recently worked on a method to measure the Curie temperature distribution in magnetic media, particularly for FePt nanogranular media, where this dispersion can severely hinder the achievable data storage density in heat-assisted magnetic recording. You can read more on this here and here.

These devices were developed as an alternative magnetic field sensor concept. They can be fabricated at the surface of a sample, contrary to sensors based on 2D electron gases, enhancing the spatial sensitivity. EMR sensors do not include any ferromagnetic materials so they are impervious to magnetic noise. For more see these two papers. We have investigated means to efficiently switch transistors made from single-walled carbon nanotubes. Particularly we have matched work functions at metal contacts with large-diameter nanotubes and used top-gates with higher-k dielectrics to obtain switching efficiencies near the thermal limit or beyond, by band-to-band tunneling. We have investigated the effect of charge doping on the Raman spectrum in graphene transistors. Doping was achieved by electrostatic bottom-gated and polymer electrolyte top-gated approaches. These studies show how Raman spectroscopy can be a sensitive measure of doping, and reveal strong non-adiabatic effects in the electronic state of graphene layers.